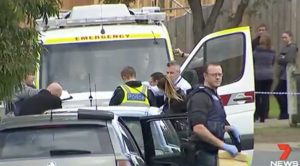 A 13-month-old girl has been stabbed to death inside a Melbourne home and a woman has been taken into custody.

A family member raised the alarm and emergency services found the child in a home on Fordham Road in Reservoir about 11am on Monday.

The toddler had suffered what police believe are stab wounds.

“Three other children were home at the time of the incident but were not harmed,” a police statement said.

“A few months back there was a female from the house being chased around by a male. The male was threatening to kill the female and we called the police,” he said.

“It’s not something that’s unexpected. A police officer said earlier it’s not a nice scene in there.”

Another neighbour said she was surprised as it was a “relatively quiet street”.